In April 2013 I wrote about the net migration and it's effect on Norwegian home prices. I have mentioned earlier that there is a strong belief in Norway that not enough new homes are built to meet the demand for housing. This argument is used so often in media that it has more or less become "conventional wisdom". The underlying forecasts of high future demand are mainly based on assumption of continuing high net migration.

Steinar Juel from Nordea Bank is among the few who have questioned this conventional wisdom. In a report from Oct'13 (in Norwegian), he takes up the rising amount of homes for sale as one indicator of a supply that meets the demand, and also points, like I did, to the volatile net migration.

Per Jæger of the homebuilders' assocation Boligprodusentene is pointing to yearly population growth of around 60 000 to 70 000, of which around 70 % has been due to net migration, and says that we should be building around 38 000 homes per year (and again adds that "it's illogical to think that home prices will fall"). Here he naturally needs to make an assumption on the household size. While the average size of a household in Norway is 2,2 persons, it is clear that migrants with lower income live in bigger households. Chris McDonald of Reserve Bank of New Zealand has found in his study that one additional house is build for around every six migrants in New Zealand. The actual number doesn't need to be even close to this high to make the assumptions of homebuilders questionable.

But that's not all. Today we got a report on population trends in 2013 from Statistics Norway and here's the updated "hockey stick": 
The implications of lower population growth on housing demand can be significant. There is an impact both directly and indirectly (through lower demand for rental units) on the amount of home buyers in the market. Polish and Lithuanian citizens are the  two largest groups of immigrants. Many of these occupy jobs related to construction and home repairs/maintenance. As the housing starts started to fall only in the end of 2013 (down 17,5 % year-on-year in Q4'13 and a whopping 37 % in Jan'14!), we don't yet see the real effect of a most likely negative job growth in the construction sector in the migration statistics. If the new home sales and housing starts don't improve soon, there will be little doubt about which direction the population growth will go in 2014.

It might be that 2014 will be remembered as the year when the big story of housing deficit (boligmangel) was finally buried?
Posted by Antti Jokinen at 20:20 11 comments:

There has been some traffic coming in from Facebook, so I thought it's best to create a presence there finally. Please "like" and spread the word if you agree with the content! I'll try to come up with real content soon again ;-)

Change In The Way EFF House Price Index Is Calculated 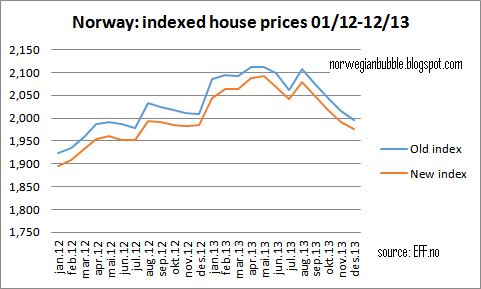 Notice how the monthly fluctuations follow a new pattern. The gap between the new index and the old index (new minus old) is not stable as you can see from this graph (data from Jan'10 to Dec'13): 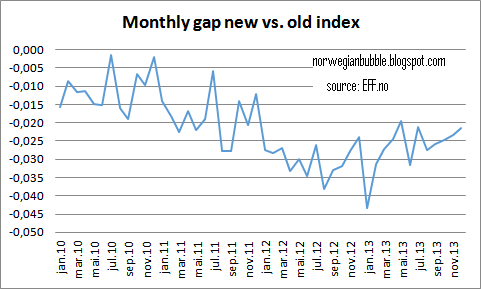 Note especially the sharp change in January 2013. It looks like the high growth between January 2012 and January 2013 is smoothed down in the new index. The adjustment becomes again smaller throughout 2013, coinciding with sharply slowing growth.

I don't know yet what to think of this. What we can be sure of is that the Jan'13 adjustment gives us higher year-on-year growth in Jan'14 compared to what it would have been in the old index, or in the new index had the gap between the new and old been more stable. It also makes it more likely that year-on-year growth in Feb'14-May'14 will be significantly lower than it was in Jan'14 (-1,0 %, which was surprisingly strong...), doesn't it? Help me out here, quants :-)

And if you think I have done a "Reinhart-Rogoff" with my Excel, let me know as soon as possible.
Posted by Antti Jokinen at 13:49 3 comments:

During the last week or two I have participated in a debate over the Norwegian financial authorities' limit on high loan-to-value mortgages dating back to 2012. The limit is not absolute, but it pushes banks in most cases to require that the buyer of the property finances 15 % of the purchase with equity. In other words, it limits the mortgage to 85 % of property value. This is known as "egenkapitalkrav på 15 %" in Norwegian.

(For further information on reasons behind this kind of limit, I suggest you read this Bloomberg article by Peter Orszag. He looks at the newly imposed limit in New Zealand, but mentions also that Canada, Israel, Singapore and Sweden among others have similar limits.)

The public opinion in Norway until late has been strongly against the raised limit. Catering to this opinion helped the newly elected government to win the elections; the parties campaigned on reducing the limit back to 90 %/10 % were it stood earlier (although it was less strictly enforced back then, and 100 % loan-to-value mortgages weren't unheard of). For sure, this is a controversial tool, but then again, there are no perfect tools. In the end, the limit is criticized exactly because it achieves the goals it was meant to achieve. You need to evaluate the pros and cons of it to form an opinion on it. I'll start by presenting the cons taken up by the dominating side, before I move to the pros, and most importantly, the underlying reasons behind raising the limit.

Norway has a relatively egalitarian society, reflecting the strength of the Nordic social-democratic movement. People are for equal opportunity. Equal opportunity can be defined in many ways, and in Norway it clearly includes the opportunity to buy a home given that you have an income that can serve the loan. What creates inequality (klasseskille) is leaving people with less (inherited) resources on the rental market, where they pay for their housing a lot more than the homeowners do (not least thanks to the heavy tax benefits enjoyed by mortgage-holders). Add the enormous house price appreciation witnessed in Norway, and you get a feeling that the rich get richer and the poor get poorer, and it's hard to deny that it hasn't been the case during the last 20 years.

The main* argument against the 85 % limit is thus that it creates inequality by leaving the ones without large savings and/or financial help from parents on the rental market. And people here genuinely -- and somewhat understandably, when we take into account the recent history -- believe that one is always better off owning. The conclusion from this is that young people should be helped to "enter the market" as early as possible, so that they don't "waste" their money by renting.

The intentions behind the policy of high homeownership, especially among the less well-off, are no doubt good. But good intentions don't always lead to good outcomes. This policy was taken to one kind of extreme in the U.S. in early 2000, where it was one of the reasons behind the subprime crisis that started in 2007. The pursuit of high homeownership has been taken to an extreme in Norway too, although we shouldn't draw too many parallels between these two countries. Whereas in the U.S. it was the means that became extreme (subprime/NINJA loans), in Norway it has been the level of achievement that is in my opinion extreme.

Homeownership in Norway has achieved what one could almost describe as cult-/religion -like status, and the homeownership ratio stands at over 80 %. In the age group 30-34 year-olds, 74 % own their own home, in the group 25-29 year-olds 52 %, and even in the group 20-24 year-olds whole 19 % are homeowners (source: NIBR). These are mind-blowing numbers, many times higher than in most of the other developed countries. And compared to inhabitants of the other rich nations, Norwegians privately own relatively little financial assets like stocks and bonds. Most of their wealth is tied to the property market. For an outsider this might sound like a sign of a bubble, but for Norwegians the central role of the housing market is rather something to be proud of (this might explain why prime minister Solberg used the concentration of wealth on the housing market as an argument against a bubble, like I told earlier).


The real concern for the Norwegian youth


As I have stated on earlier occasions, I'm concerned for the Norwegian youth. It's clear that there is a risk related to taking a mortgage with a high loan-to-value ratio. The house prices do fall, and sometimes significantly.

These are young people who have the most productive decades of their life right in front of them. According to NIBR, 52 % of 20-34 year-olds are homeowners. Of these, according to Finanstilsynet, 35 % have mortgages where the loan-to-value ratio exceeds 85 %. This is where in my opinion the biggest risk to Norwegian economy lies. Many of these young people have seen no alternative to owning. And the state and the banks have taken care that an internationally disproportionate share of them get to own -- by providing them with easy credit.

I'm not the only one who is worried that the young people who have been helped to the market might end up getting hurt. The 85 % limit is there because Norwegian and international financial authorities, among others, directly or indirectly (through bubble concern) share my concern for the Norwegian youth. This includes Norges Bank, Finanstilsynet, Ministry of Finance, IMF, OECD, and so far three Nobel laureates in economics. (Some evidence here, here** and for example here.) Do these authorities, or I, know for sure that the house prices will fall significantly? No. But we know that the risk of this happening is real. We know that no one should state that they help the young people by providing them with easy credit, so that they can buy property that according to many indicators is already overvalued.


So here are the two sides to this debate (somewhat tongue-in-cheek, if you allow):


Team A: "We're helping the young people by calling for easier access to credit"

Mostly homebuilders and real-estate agents (!) since the house prices started to fall.


Team B: "We're helping the young people and the Norwegian economy by restricting access to credit"


It's time for you to choose your side.

* Some people more understandably oppose the limit on the grounds of negative consequences of government intervention in the markets. It's another story, but I think you don't want to start here if you want to free the markets from government intervention. A free market is not reality, and banks don't need to behave like they would behave in a free market. Instead, they have very strong (perhaps short-term, but nevertheless) incentives to lend out more freely than is healthy for the economy.

** This is a very important article in that it reveals what the government really thinks about the housing market. I think we can thank the new finance minister Jensen for saying out loud something that she and the prime minister Solberg since have tried to downplay in public; there is a real concern for the housing market. This perhaps also explains why the government didn't even try to keep it's promise to take the limit back to 90 %/10 %.
Posted by Antti Jokinen at 20:28 4 comments: