The Death of Economic Cycles

I guess I could say I was born under a lucky star. In the year of my birth, 1979, Businessweek published as their cover story a now famous article "The Death of Equities". What followed was a revival of equities, culminating in the dotcom bubble of 2000. If you bought in 1979 and sold in early 2000, you made a fortune. The big picture is that the standard of living  in the Nordics has mostly been improving during my lifetime (there was a fairly deep recession and house price declines in the late 80s/early 90s, though). It seems that with higher standard of living comes higher house prices, and household debt. One could ask if we have had it too good.

But let's move to the subject. Mark Thornton, an economist, who wrote about the Norwegian housing bubble already in January this year (on my birthday, of all days!), has written a short update on the situation in Norway. In it he links to my blog reports as evidence that Norwegians have entered the "denial phase". I think he's right in that there seems to be a widespread denial of the possible - even likely - negative consequences of the house price decline that has just started.

It seems that nearly every driver of economic growth is expected to flatten out. An extreme example of this is this Dagens Næringsliv interview with Rune Bjerke of DNB where the leader of biggest bank confirms that


...in other words all the main drivers of economic growth, will more or less flatten out ("flate ut"). "Flate ut" has become a real catch-phrase in Norway during the autumn! It reminds me of "boligfest", housing party, which was all over media just a year ago, but is now gone. It referred to the rising house prices and the related "wealth effect".

What Norway has gone through during the last 20 years could be described as some kind of "Golden Age". And especially the last 3 to 4 years - after the massive worldwide fiscal & monetary stimulus managed to turn the looming, deep downturn into a prolonged boom in Norway - have been seen even as unhealthy (for example, in the article Bjerke talks about healthier, more sustainable housing market and oil & gas sector, referring to the high growth rates of past).

All this takes me again back to Irving Fisher and the "permanently high plateau" of stock prices in 1929. After admittedly unsustainable, even unhealthy growth in house prices and oil & gas sector, what we should expect according to Bjerke and Statistics Norway (see my previous post) is a couple of years of simultaneous flat development in any imaginable indicator in the Norwegian economy, followed by... new growth. And the reason for nothing really going wrong in the coming years? I know I will be underestimating their intelligence, but it sounds to me like the reason is that things are so well in Norway today. Salaries will keep on rising at 3-4 % p.a. and continued work-based immigration will keep demand for housing high. All this despite lack of growth and investments, declining oil price and increasing unemployment.

Like I mentioned, Statistics Norway even assumes that the oil price will decline over 20 % during the next two years. According to Bjerke and SSB, as well as many other experts in Norway, things just flatten out at all-time-high levels after a long period of substantial growth. There are exceptions, like Nordea Bank (who expect 15-20 % house price decline), but even in their forecast the word recession is nowhere to be found.

In my amateur opinion, based on the decline in nearly all indicators, the base scenario for Norwegian economy in 2014 should be a recession. Unless, of course, one assumes that the economic cycles are dead.

I must finish with a side note. The Norwegian people, experts and media are looking for reasons behind the house price decline, and as I have already mentioned, pessimism is very high on the list of suspects. It's the negative media and all these "doomsday prophets" (forecasting a 15-20 % house price decline makes you one) that are causing the negative spiral. Am I seen as an enemy of the public? Who knows.

The truth is that you need "pessimists" (people suspecting a bubble), and many of them, to avoid a bubble. And you need them to feel free to air their opinion in the media, early on when the prices have taken off, without being branded as doomsday prophets or pessimists. And some people actually need to heed this advice. This has not been the case in Norway, and as a result the public opinion has been the most complacent I've ever witnessed. This complacency, lack of concern, is one of the reasons for what is most likely a housing bubble. Two years ago the previous prime minister, Jens Stoltenberg, tried to warn against a bubble. He tried to affect the sentiment that was too positive. But it seems no one paid attention. Now the widespread concern for "too pessimistic" media coverage just speaks for the underlying concern for a housing bubble. A change in sentiment doesn't take a healthy market down, but it will always help to bring down a bubble. 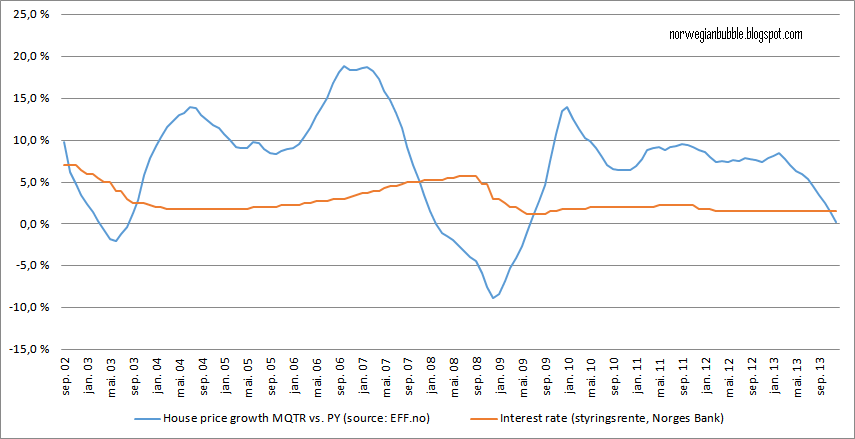